Kendrick Lamar says he has a deep appreciation for music since it forever changed him for the better.

He expressed that sentiment in a heartfelt Instagram message that was posted on Wednesday, August 3. K Dot also said he'll always be an underground artist, which is ironic since he's one of the biggest rappers on earth. 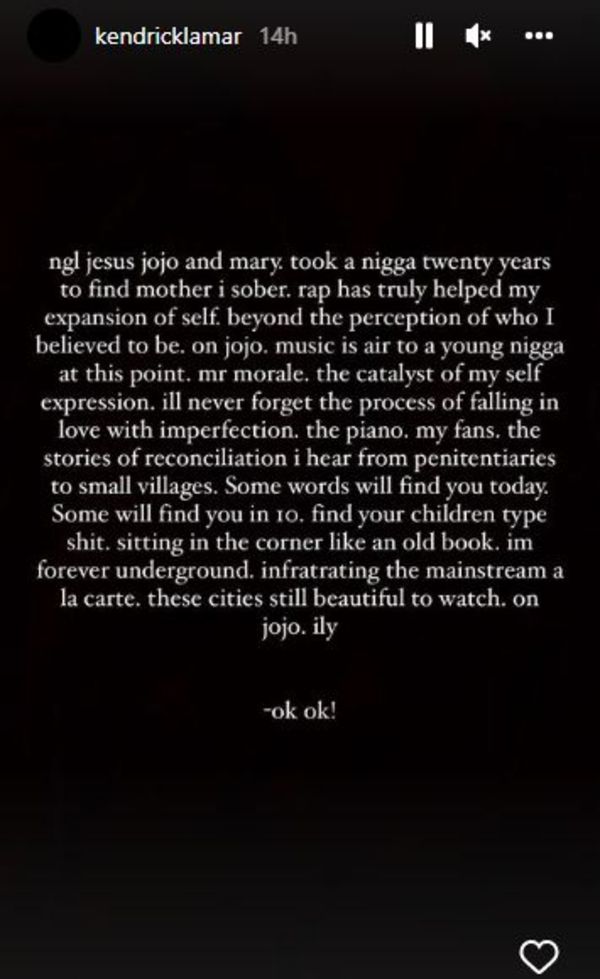 "ngl jesus jojo and mary. took a n*gga twenty years to find mother i sober,” wrote Kendrick, who is reportedly already working on the follow-up to Mr. Morale & the Big Steppers. “rap has truly helped my expansion of self. beyond the perception of who I believed to be. on jojo. music is air to a young n*gga at this point. mr morale. the catalyst of my self expression. ill never forget the process of falling in love with imperfection. the piano. my fans. the stories of reconciliation i hear from penitentiaries to small villages."

"Some words will find you today. Some will find you in 10. find your children type sh*t," he continued. "sitting in the corner like an old book. im forever underground. infratrating the mainstream a la carte. these cities still beautiful to watch. on jojo. ily. -ok ok."

Kendrick is currently on The Big Steppers Tour and was obviously feeling reflective as he traveled.