Bow Wow is no stranger to taking L's on the Internet.

But his latest social media kerfuffle may not have a clear-cut loser.

Bow jumped on Twitter today and shared a photoshop with him as part of the Death Row family.

Where it all started ... pic.twitter.com/GmyRNaA6a2

He then further explained his affiliation with the label.

I was on death row at 6. This was the label roster. A fan sent me the pic it brought back memories. Big was on bad boy my bros. https://t.co/iNt7wFFI6V

While many on Twitter were quick to challenge Bow's ties to Death Row, there is a lot of truth to them.

Snoop Dogg, who was on Death Row at the time, did discover Bow when he was six. However, Bow never released any albums with Death Row and doesn't appear to have ever had paperwork with them.

Nevertheless, those who are Twitter clowning Bow for making another outlandish claim aren't fully correct either:

Bow Wow got his ass whooped for jumping on the couch in the Gin and Juice video and now he claiming Death Row. Ok famski.

Bow Wow was a little 4 year old nigga on Death Row... a mascot at best... all credit should go to Jermaine Dupri and So So Def!

nobody care if bow wow was signed to death row, we laughing about him photoshopping the picture, fucking twitter police ass people.

But whatever Bow's exact status with Death Row was, you can still laugh at the photoshop. 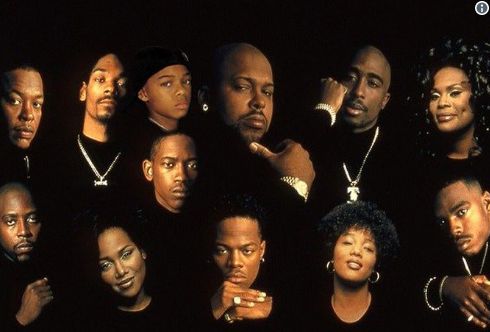 [Related: Bow Wow lashes out at the haters after latest clowning.]