DJ Akademiks was seen in a viral video getting into an argument, then a physical confrontation with his girlfriend and other women.

He was also heard screaming "I'm the prize" during the melee.

Freddie Gibbs has since reacted to the clip and taunted Ak over it. The two men have been beefing for some time, with both throwing shots at each other.

Lemme find out this nigga ak bald in the byke 😂 pic.twitter.com/FBhrNcHL6z

Ak didn't respond to Freddie yet but he did explain himself. 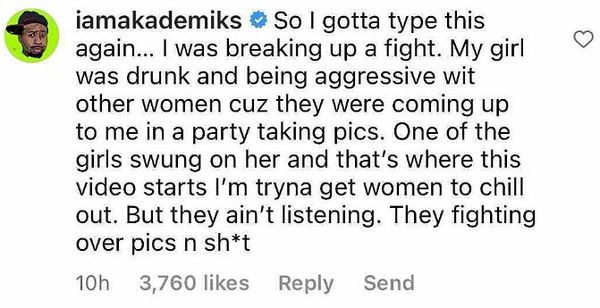 “I was breaking up a fight,” he wrote on social media. “My girl was drunk and being aggressive wit other women cuz they were coming up to me in a party taking pics. One of the girls swung on her and that’s where this video starts. I’m tryna get women to chill out. But they ain’t listening. They fighting over pics n sh*t.”