North West Spits A Verse At Yeezy Season 8 In Paris

It's official, Kanye and Kim's 6-year old daughter North West is a rapper and performer, just like her father.

Today at Paris Fashion Week, the Yeezy Season 8 debuted and featured a slew of models to show off Kanye's newest designs.

On top of the models, Kanye had his own daughter North West perform, and this wasn't the first time she grabbed the mic to rock a crowd.

North West grabbed the mic with confidence and spit, receiving "oooh's" and "awwww's" from the crowd.

Do you think North West will have a successful music career?

in July of 2019, ZaZa & her dad went into the studio for the ultimate experience! To finally begin making the music she wanted to make. We take PRIDE in creativity, and believe whether a child’s involved or an adult... creativity deserves RESPECT/homage! What @kimkardashian (Kanye west) are doing with their daughter... with the inspiration of ZaZa & our family in mind is okay... we not mad BUT . . PLS SHOW LOVE AND SUPPORT TO THE ORIGINAL FIRST!!! We admire Kanye west, and adore his journey. However, we don’t wanna feel like our daughter’s journey in the world of entertainment is being STIFLED . . THANK YOU! 💕 . . #ZaZaChallenge #WhatIDo #ThatsANoNo #ZaZa #BlackGirlMagic #blackgirlsrock #HypeKids #hypebae #redcarpetgirlz #explorepage #viral #yeezyseason8 #kanyewest #kimkardashian 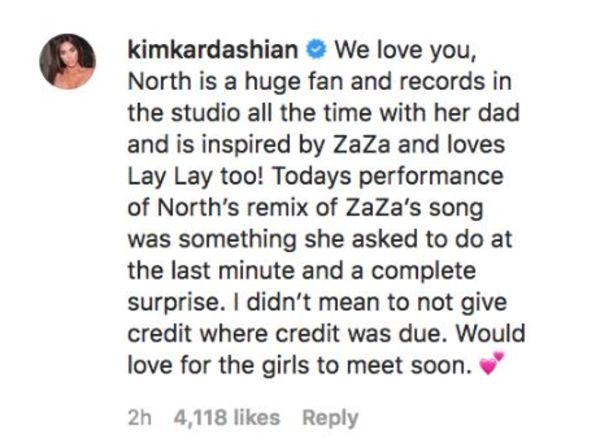