Amid all of his Hitler praise, your favorite rapper Kanye West disclosed that he had caught ringless Point God Chris Paul with his ex-wife Kim Kardashian. 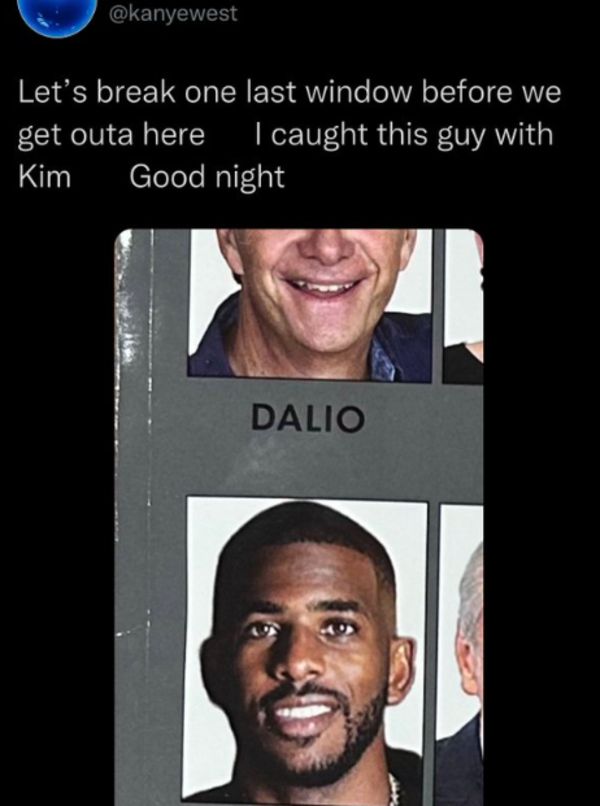 When the word reached Twitter they did their thing.

Here is some of the reaction to KK and CP3.

Chris Paul buying his wife flowers to try and save his marriage pic.twitter.com/YsyWQE6RaZ

Chris Paul about to drop that “now you know that man crazy as hell” to his wife like a draw four card in uno.

Devin Booker and Chris Paul at the Kardashian house pic.twitter.com/jdDyGLg2xl

Kanye watching Twitter forget about him being a nazi by ruining Chris Paul’s marriage pic.twitter.com/FEKTcFS0ZN

Kenny: “Charles, you had something to say about CP3?”

Barkley: “I said my Suns would be better if Chris Paul was chasing Ws instead of BBLs.”

Ernie with his head in his hands: “Okay, moving on …”

Chris Paul enjoying a nice meal with his family and sees why his phone is blowing up pic.twitter.com/9r1AB52O40

Chris Paul just caught the CRAZIEST stray for no reason